A Humbling Experience with Phở

Before we begin to read about our rave of the day, I would like to start off with a short retelling of how the journey of this dish came about as I do feel that it provides an essential background to this foodie's adventure.

Recently, I'd spent some time vacationing in Hanoi, Vietnam, and though we had arrived at the near end of the monsoon season (the city even suffered a flood a week before the trip), oddly enough, my constant state during my time there was often in scorching conditions. The ever dusty streets, constant honking noises from horrible traffic, and stale hot air were mercilessly upon us the moment we stepped out of our hotel every day, even during the nights. That being said, as removed as we were from our regular comfort zones, it did not deter me and my fellow foodies to brave the odds and embrace many of the city's offerings of exotic street food.

Being a quintessential identity to Hanoian cuisine, one of our main priorities on the must-try list of street food was Pho (phở). Pronounced as "fer", to those unfamiliar with what Pho actually is - it is a lovely dish consisting of a good chicken soup or beef broth, a handful of rice flour noodles, with Asian herbs and greens like coriander, and bean sprouts, and to top it off, pieces of delicately thin slices of beef (or chicken depending on the soup base)

Being our first time in the country, and having done only minimal pre-travel reading about the capital, we decide to get local knowledge as to where we could find the best Pho in the city, and sought the generous help of our hotel manager, who thankfully spoke English that was fairly fluent.

According to him, the best local Pho was located in the heart of the Old Quarter where most of their good eateries were located. Oddly enough, he could not remember the name of the place, but he knew the exact address. So with that, we tried our luck to go in the later hours of the lunch period, but apparently their business was so good that they were already closed and we were told to come back at 6pm for their dinner service.

Fast forward to the evening and by that time we were starving for some seriously good Pho. After a long walk that got this travel weary foodie thinking that this quest was almost like a pilgrimage for holy Pho, we finally reached our destination - 49 Bat Dan St, otherwise known as Pho Gia Truyen. 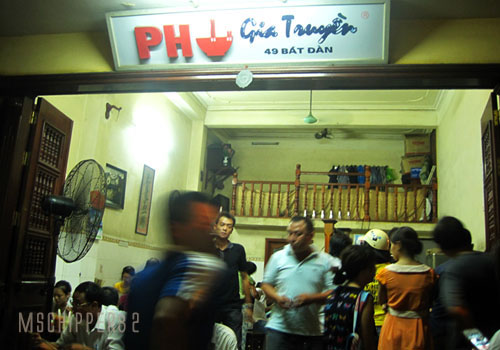 To our delight and dismay, there was a huge crowd of people already there, lining up for their share of beefy goodness in a bowl. As one can see, even though the state of the establishment was far from inviting and comfy, the power of the mighty Pho spoke for itself.

We quickly staked out a table just outside the entrance and settled down while the other half of our travelling foodies got in line. Whether it was the street or uneven length of the legs, our kiddy table was tilted toward one end so we had to be extra careful with our food. Being that conditions were so unfavourable for any amateur photographer, I hope readers can excuse the quality of these pictures. So without further ado, I bring you beef Pho done two ways. 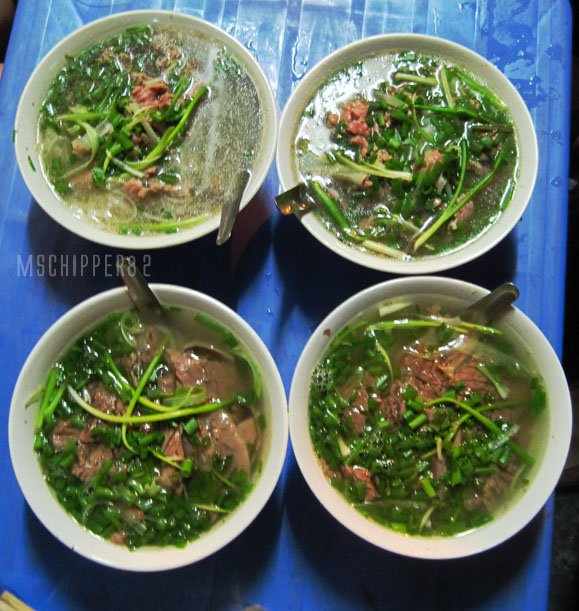 With an extremely generous serving of greens and reds, visually, it just makes one want to dig in immediately were it not for the extreme heat radiating off the entire bowl. Our metal spoons were hot to the touch and it took a while before it cooled and be ready for use.

As I felt myself perspiring faster than I could replenish my water intake, I tried a little soup with certain caution, thankful that it was not very oily. The taste of the soup itself was very "clean" and "pure", the flavour was distinctly and authentically a true Asian beef broth, combined with it's herbs and vegetables, made this a joy to savour despite the torrid heat of Hanoi.

The smooth and silken noodles are absolutely delightful and the beef itself is tender. One can easily see that the meat of the rare ones are slightly more pink than the ones that are well done. Another detail to add is that because the meat of each individual slice is cut very finely, one need not fear of having  a piece of overly tough beef that would promptly tire one's jaw and ruin the rest of the dish. 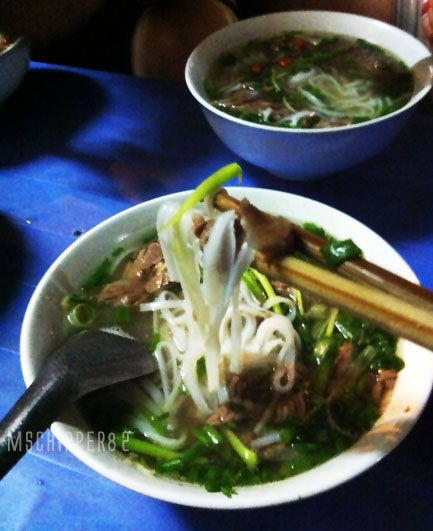 For the adventurous lot, you can enhance and customise your Pho by squeezing a hint of citrusy lime, adding a touch (or a big spoonful) of Chinese chili sauce, and tossing in a few fresh mint leaves to provide some extra zing that lifts the flavours and really bring it to another level. The combination of salty, sweet, sour and minty goodness can all be tailored to suit one's personal taste buds.

After our Pho was done, we ended off our dinner with a simple bottle of icy cold and sweet Coke to quench the heat before we set off to discover more of Hanoi.

Overall, I have to admit that it was worth the effort, discomfort and the heat to get a taste of this Pho. No kidding folks, that's how good it was. So if you're not afraid of a little hot weather or sitting on kiddie chairs and tables out in the open, don't forget to drop by 49 Bat Dan street and give this a good go if ever you find yourself in the norther parts of Vietnam, somewhere along Old Quarter.

Spotlight on the beauty of Tataki

Usually to the masses, when one thinks of Japanese cuisine, words like sashimi, sushi, ramen, udon and tempura are familiarly popular. But there are other lesser known varieties of this wonderful culture of food, and today I will be sharing something that a few foodie buddies and I had the wonderful opportunity of enjoying recently at a rather popular Japanese restaurant nestled in the heart of River Valley Road in Singapore just before our monthly club retreat/therapy session (more details on this venue later).

Out of the four dishes we had, this was the best of the lot, and it outshone even the bad part of our dining experience when we had to return one dish because it was not even cooked properly. And with that I humbly present to you....


THE RAVE OF THE DAY:
Beef Tataki Salad 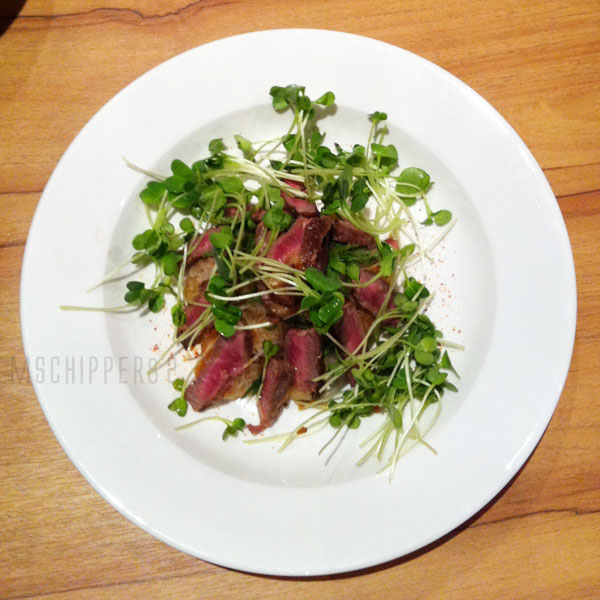 The definition of Tataki (təˈtaki) according to the Oxford dictionary is: (in Japanese cookery) a dish consisting of meat or fish steak, served either raw or lightly seared.

Visually, what you will first notice is the contrast between the fresh and vibrant green of the kaiware sprouts (think of it as a Japanese version of the "western" alfalfa sprouts) against the dark red and brown of succulent and tender slices of beef.

Once you look past the surface, you'll start to notice that the slices of meat sit atop a mini hill of daikon (aka Japanese white radish) doused in a vinaigrette. It has been prepared two ways - sliced thinly and diced to little bits - to give a play of different textures to this otherwise unassumingly simple vegetable.

Adding to the finishing touches is a very light dust of orangy red chili powder surrounding the salad itself. 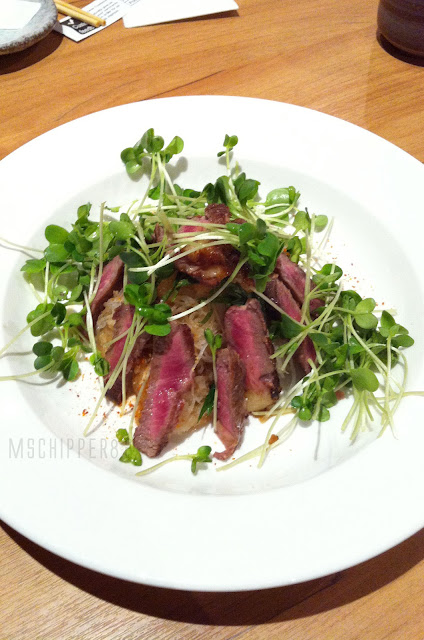 The kaiware sprouts have a slight bitter tang that is rather unpleasant if you don't like bitter tasting foods. But when you take it with the savoury, tender melt-in-your-mouth beef and crunchy, mildly sour daikon, the combination is a great mix of flavours and textures that reminds me of the musical harmony from one of Tchaikovsky's String Quartet pieces. If you're a meat lover, then for $10.80, this is definitely worth every darn penny!

And while the common understanding is that red meats go with red wines, this isn't quite so in the particular case in point. Maybe because this is a salad (and a Japanese one at that), but personally I feel the best way to compliment this wonderful dish, is to have it with an icy cold glass of Sapporo beer. Trust me, you will not go wrong with this winning combination.

If you're keen to try this out, you can head down to Tampopo at Liang Court and give it a go. This was a divine dish that definitely made it worth our 10 minute wait with mostly local Singaporeans and Japanese residents (and tourists) on a bustling Friday night.

Why Food is Love

Life is made of many beautiful things, and food is one of those things that can please one in sight, smell, taste, touch and even sound at times. It is a true celebration of the senses, and for that I have a great appreciation for good food. And it is the kind of appreciation that makes you want to shout it to the world or at least rave about it to your fellow foodie buddy.

It doesn't have to be the fanciest or most expensive item on the menu. As long as it's something that tastes good AND fulfils the other criteria of the senses to make the dinning experience ever more so enlightening and euphoric in that moment of time when presented before me, then it's bloody well good enough to be remembered in writing and pretty pictures.

With that in mind, I thought it was about darn tootin' time I started to put these collected pictures and memories of my food explorations all into one place and share my experiences as I come across them in life so that others could learn and find out for themselves if they so wish to embark on the journey to food paradise.

Suffice to say that I hope to keep this going for as long as I can, and I hope you'll like this as much as I do when it comes to good food.